The link between this: 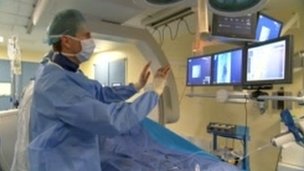 The system allows them to manipulate images with their voice and hand-gestures rather than using a keyboard and a mouse. The surgeons currently working on perfecting the procedure state that these means of control helps them avoid disruption.

For now the forecast is outstanding. The doctors working on this project believe this can become a standard procedure over the next 10-15 years. The new wave media technology such as 3D imaging has already become a reliant tool to carry out complex procedures.

This system will be familiar to anyone who has used Kinect interactive games at home.

This has been adapted to respond to surgeons voice commands and arm-movements during operations.

The initial trial at St. Thomas hospital is in vascular surgery, for procedures such as inserting a graft to repair a damaged aorta, the main blood vessel running through the body.

Standing straight, arms raised like an conductor, the surgeon, Tom Carrell, issues commands to a Kinect sensor perched beneath a monitor displaying a 3D image of the patientâ€™s damaged aorta.

With hand gestures he can pan across, zoom in and out, and rotate images. He can then lock the image and make markers to help ensure the graft is in exactly the right place.

â€œUntil recently, I was shouting out across the operating theatre to tell someone to go up, down, left right. But with the Kinect Iâ€™m able to get the position that I want quickly â€“ and also without me having to handle non-sterile things like a keyboard or mouse during the procedure.â€

Mr. Carrell says the technology is easy to use.

â€œThe sensitivity is the main thing, but itâ€™s very simple gestures, like on a smart-phone. Once you know the gestures itâ€™s very intuitive.â€

This is one of the first trials of its kind in the world. Some of the features such as the voice control and gestures tailored to vascular surgery â€“ are unique.

The refinements from gaming technology to complex surgery have been developed by Microsoft Research, with support from Lancaster University. Helena Mentis from Microsoft Research says the operating theatre presents particular challenges.

â€œIn something like a surgical theatre weâ€™re interested in a very constrained area. You have surgeons and scrub nurses that are all very close to one another. You have a patient in front of you. You donâ€™t have the ability to reach up and reach out as far because youâ€™re sterile. You canâ€™t touch anything thatâ€™s not already sterile.â€

This trial will soon be extended to other centers and other types of surgery. John Brennan, who is president of the British Society for Endovascular Therapy, says the procedure is still in its early days but the potential is great.

â€œI think these sort of advances in image manipulation which is an integral part of the a lot of the minimally invasive stuff that is done nowadays â€“ inevitably itâ€™s going to become more refined and available. I would find it difficult to think about operating rooms in ten or 15 years time where these were just not the normâ€

Dr. Mark Rouncefield from the School of Computing and Communications at Lancaster University welcomed the trial.

â€œThis is a lovely example of a successful interdisciplinary research project, combining the technical skills of computer scientists with a social scientific and medical expertise that ensures the new technology resonates with the way in which surgeons actually do their work.â€