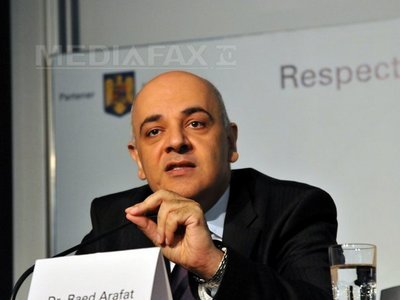 His decision was triggered by disputes with President Traian Basescu, and Health Ministry officials over the new draft law aimed to reform the healthcare system.

He is the founder of the mobile emergency rescue service SMURD.

Health Law Project initiator, Cristian Vladescu rejects the critics and statements of Raed Arafat. â€œThe statement that SMURD is in danger and that an online petition is needed to save the service has no foundation. Quite on the contrary he states that SMURD might even increase the number of doctors working for them.â€

Cristian Vladescu abolishes the criticism of the former Undersecretary of State Health Raed Arafat regarding the new draft law on health. â€œThe claim that public money will be wasted and divided between several ambulance services is false, because they will be paid strictly for the services provided, so that all the money will go to help the patients. Patients will benefit from the fact that there will be more ambulances in the system.â€

He emphasizes that the situation in which private ambulances will flock to the same case as the private ambulances is highly doubtful because the dispatch is the one who makes references to the case, and it is still close coordinated by the state. â€œTherefore if there is such â€œclutterâ€, it can occur only through public dispatch, which is considered today an example of performance, so this is excluded,â€ he explains.

The number of doctors working for SMURD could increase

â€œThe statement that SMURD is in danger and that you need an online petition to save it has no basis in law, due mainly to the fact that it belongs mostly to the Ministry of Internal Defense, benefiting from significant funding. By implementing the new legislation, the number of doctors that could work for SMURD will increase due to the fact that there will be more units for receiving emergencies. SMURD does not have its own doctors, itâ€™s a structure of MAI, it has paramedics, and when needed requires doctors from the hospitals to which they are subordinated. Therefore doctors cannot quit SMURD because SMURD has no employed physicians,â€ said Vladescu.

This is already happening today, if they receive better pay and have better conditions they go. The difference is that instead of leaving the country, they will work here but in better working conditions.

â€œThe Ministry of Health is the one that under the bill decides how many ambulances will be accepted in the public system and also in which locations. Also the Ministry of Health is setting prices for services, so the competition cannot be unfair when the rules are made by a public institution for all participants in the emergency system,â€ said Vladescu.

â€œAt least as much as they are now, sanctions in the current system will be extended to all who work in the system. It is not possible for public health providers to receive a penalty for a violation and the private health providers to receive another type of sanction for the same violation. If current sanctions are good, they will remain. If they prove themselves to be insufficient they will be modified for all participants in the emergency system.

A single dispatch system for all providers:

The Framework Law provides explicitly that a single dispatcher (112) will exist for those who will be accepted into the system. Ambulances will obey the chief employer in terms of car maintenance, training, etc.. The same model is now widespread in the healthcare system in Romania for many services. For example pharmacies are 98% private. The patient does not care if the pharmacy is a foundation, an Ltd.Â  or state owned. All follow the same rules and rates determined by the Ministry of Health. Due to competition, a lot of pharmacies offer services cheaper than determined by the Ministry of Health, so the patient has only benefits. Â