Consider starting work as a doctor in France?

Before starting the actual work, here are some general facts about Franceâ€™s healthcare system!

The French healthcare system was considered in the year 2000 â€œthe best overall health care providerâ€ by the World Health Organization, and in 2005 France spent almost 12% of its GDP on healthcare.

The current system has undergone several changes since its foundation in 1945, though the basis of the system remains state planned and operated.

Jean de Kervasdoue, a health economist, believes that French medicine is of great quality and is â€œthe only credible alternative to the Americanization of world medicine.â€ According to him, Franceâ€™s surgeons, cliniciansâ€™ psychiatrists, and its emergency care system are an example for the world.

The entire population must pay health insurance. The insurers are non-profit agencies that annually participate in negotiations with the state regarding the overall funding of health care in France. There are three main funds, the largest of which covers 84% of the population and the other two a further 12%. A premium is deduced from all employeesâ€™ pay automatically. The 2001 Social Security Act, set the rates for health insurance covering the statutory health care plan at 5.25% on earned income, capital and winnings from gambling and at 3.95% on benefits (pensions and allowances).

After paying the doctorâ€™s or dentistâ€™s fee, a proportion is reimbursed. This is around 75-80%, but can be as much as 85% The balance is effectively a co-payment paid by the patient but it can also be recovered it the patient pays a regular premium to a voluntary health insurance scheme.

Under recent rules, general practitioners are required to act as â€œgate keepersâ€ who refer patients to a specialist or a hospital when necessary.
About 65% of hospital beds in France are provided by public hospitals, around 15% by private non-profit organizations, and 20% by for-profit companies. 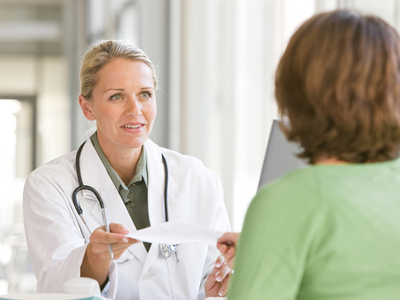 While French doctors only earn about 60% of what American doctors make, their expenses are reduced because they pay no tuition for medical school and malpractice insurance is less costly compared with the United States. The French National Insurance system also pays for a part of social security taxes owed by doctors that agree to charge the government-approved fees.
MÃ©decin generaliste /General practitioner

The mÃ©decin gÃ©nÃ©raliste (commonly called docteur) is responsible for patient long-term care. This implies prevention, education, care of diseases and traumas that do not require a specialist. They also follow severe diseases day-to-day (between acute crises that may require a specialist).

They survey epidemics, fulfill a legal role (consultation of traumas that can bring compensation, certificates for the practice of a sport, death certificates, certificates for hospitalization without consent in case of mental incapacity), and a role in emergency care (they can be called by the SAMU, the emergency medical service). They often go to a patient’s home if the patient cannot come to the consulting room (especially in case of children or old people) and they must also perform night and week-end duty.

Ambulatory care includes care by general practitioners who are largely self employed and mostly work alone, although about a third of all GPs work in a group practice. GPs do not exercise gatekeeper functions in the French medical system and people can see any registered medical practitioner of choice including specialists. Thus ambulatory care can take place in many settings.

A government body, ANAES, Agence Nationale d’AccrÃ©ditation et d’Evaluation en SantÃ© (The National Agency for Accreditation and Health Care Evaluation) is responsible for issuing recommendations and practice guidelines. There are recommendations on clinical practice (RPC), relating to the diagnosis, treatment and supervision of certain conditions, and in some cases, to the evaluation of reimbursement arrangements. ANAES also publishes practice guidelines which are recommendations on good practice that doctors are required to follow according to the terms of agreements signed between their professional representatives and the health insurance funds. There are also recommendations regarding drug prescriptions, and to a lesser extent, the prescription or provision of medical examination. By law, doctors must maintain their professional knowledge with ongoing professional education.

If you would want to become part of the French health care system, feel free to read more about France on our website see our current job vacancies and apply!