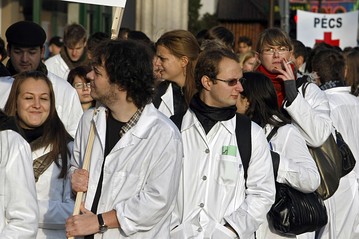 The Hungarian government is trying to tame the wave of medical doctors leaving the country by offering them money to stay. But as the application deadline approaches, few have expressed interest in the government scheme.

Under the program, Hungarian doctors can receive 100,000 forints ($530) net on top of their monthly salaries for a period of 5 years. This means the doubling of their wages during that time. In return, the programâ€™s participants have to make a commitment to practice medicine in Hungary for at least 10 years and to never accept any gratuity money from patients, a widespread practice in Hungary.

But it appears that the initiative has fallen well short of the originally expected 600 professionals. Fewer than a hundred career-starting doctors have so far preferred some extra pay over the possibility of working abroad, according to Hungarian daily Nepszabadsag. The ministry announcing the scholarship noted that there were also 11 pharmacists applying. Due to the low turnout the ministry has extended the scheme hoping that more doctors would be willing to get involved.

â€œResidents are skeptical about the scholarship and only about 10 people (within the association have shown any interest in applyingâ€, Magor Papp, head of the Hungarian medical residents association, told local news agency MTI.

Career starters apparently donâ€™t want to make such commitments because they donâ€™t see that their livelihoods would be guaranteed once the five years on a double salary are over. A survey conducted by the association fund that 74% of new medical graduates are planning to work abroad.

The migration of doctors is quickly becoming an acute issue for Hungaryâ€™s healthcare system in general. Some 1,500 medical professionals are missing in the county, which threatens the stability of the system. The situation could soon turn even worse.

A survey conducted by the Hungarian doctors association found that 6.000 doctors and residents are considering leaving Hungary unless their salaries go up. Residents also launched a campaign in which they deposit their resignations at an attorney. The documents are to take effect at the end of the year unless the government is willing to increase their pay.

Doctors want to get a 100% increase in their salaries, which would take 200 Billion forints in total. But the rise would still mean theyâ€™d be making less than the European average, they say. Hungaryâ€™s medical residents now earn in the range of 80.000 forints to 100.000 forints net, while the average net salary in the country was 140.300 forints in June.

Source of the article here:Â http://blogs.wsj.com/emergingeurope/2011/08/22/hungary-unsuccessful-in-stopping-exodus-of-underpaid-doctors/