The Swiss Etiquette, a guide for living in Switzerland

Switzerland is a tiny country with little under 8 million inhabitants. It is surrounded by four far larger neighbors: France, Germany, Italy and Austria. Yet despite its small size, it seems everyone has an opinion about what life is like in Switzerland. For some the mountainous country is a beautiful, pristine paradise. For others itâ€™s uptight, conservative and even boring.

Switzerland is most famous for its mountains, cheese, chocolate, cows and watches. Of course these things are part of everyday life: check out the mouthwatering display of chocolate bars at any grocery store! Still, the Swiss and their country are far more complex.

One of the biggest challenges is to accurately pin down who exactly typifies the average Swiss. Why? Because there are four different cultures and languages in Switzerland. Some 64% of Swiss speak German. About 20% speak French, 7% speak Italian and less than 1% speaks Romansh.

Only by living here does one learn the customs and etiquette that make the country so much more than its stereotypical image.

The Swiss, for example, pursue a policy of neutrality but also have a large army to defend the country. Itâ€™s not unusual to phone up a business acquaintance and find out he left for military service for a few weeks.

In the spirit of trying to get to know the Swiss better, hereâ€™s a cultural guide focused on the German-speaking part of the country. 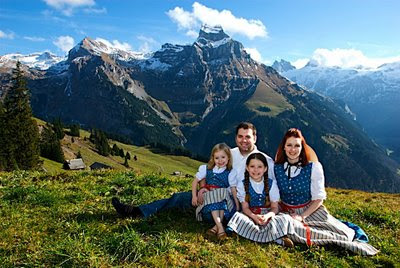 This is an area you should try to get right or things could get uncomfortable. The Swiss, while not the most outgoing individuals on the planet, still like their formal greetings.

If youâ€™re meeting someone for the first time, stretch out your hand and say grÃ¼ezi (hello). If you meet a friend, then you kiss them three times: offering first your right cheek, then left, then right again. The latter exchange is for women greeting women and men greeting woman. The boys stick with a handshake or maybe a man hug.

When you go into a store say grÃ¼ezi to the sales people, and when you leave say adieu. People may also greet strangers with a grÃ¼ezi when passing in the street, and always on hiking trials. Bitte and merci or danke are also appreciated here. This may be the hardest thing for some people to accept: the orderly Swiss do not believe in lining up. Whether itÂ´s the cheese counter at the supermarket, the bus stop, or the ski lift, itÂ´s every man for himself. Do not expect that the Swiss will honor or even acknowledge a line up.Â Instead be prepared to speak up and tell others that itÂ´s your time to buy bread and donÂ´t be shy about using a little elbow to get ahead when there are hordes of people.

The Swiss also arenÂ´t fusses about bumping into each other. Maybe itÂ´s because there are so many people packed into a small country. If you find yourself bumped, donâ€™t make a dirty face but instead say scho guet to the bumper and move on. If you do the bumping say sorry or Ã¤xgÃ¼si.

The Swiss tend to take a more arms-length approach when it comes to their personal lives. They tend to be quiet and discreet when they first meet you so donâ€™t tell them your whole life story or ask probing questions about their family or job. It will probably require a lot of work and time before you are upgraded from acquaintance to friend.

“It is best to approach new people carefully and not to be too forward.â€™â€™

This can be frustrating for foreigners who are used to making instant friends, but itÂ´s no reason to quit and hang out only with expats.
Keep Swiss reticence in mind if you need help, whether itâ€™s finding and address or getting help lifting your stroller onto the train. The Swiss are usually very happy to assist someone, but often wait until they are asked before springing into action.

The Swiss live up to their reputation when it comes to the area of punctuality. Here being late is not a way of life: itÂ´s just rude.
Going to a business meeting? Show up early so you look organized, competent and respectful.

The same goes with play dates it the sandbox: meeting up with your friend and her child an hour after the agreed time likely wonÂ´t go down well.

People are also expected to show up on time for social outings, whether itÂ´s dinner at someoneÂ´s house, drinks at a bar, or party. The Swiss arenÂ´t asking a lot: if the train and busses can run on time, why canÂ´t you?

When meeting friends for a drink, there are strict rules when it comes to how the toasting unfolds. Wait until everyone has their beverage, look your toasting partner in the eye, clink your glasses, and say zum Wohl or prost. Repeat the same ritual with everyone in the group. Then let the drinking begin.

You donâ€™t get this squeaky clean and organized without rules, and the Swiss have many to ensure life keeps running smoothly.

For example you canÂ´t just throw your trash into any old bag: instead you must pay for special garbage bags. There are also strict rules for recycling: paper must be bound with a string and put out in a special collection spot on the anointed day. Glass and aluminum are taken to a recycling depot, though itÂ´s forbidden to do so during the evening and on weekends. Plastic bottles are returned to the store, along with coffee capsules. The Swiss take a decidedly hands-off approach when it comes to raising kids. No helicopter dads and moms here. Instead, toddlers are encouraged to zoom around on balance bikes, go to playgrounds in the forest and climb to their heartsÂ´ content in the playground. School-age kids are encouraged to walk or bike to school by themselves, and play outside with friends on their own.

Switzerland has a unique education system. Children typically enter kindergarten at the age of 4-5. After grade 6 or 9, they can try tan exam to enter Gymnasium, the school that allows them to go on to university.

Many Swiss children however go through a stream that incorporates education with vocational training. DonÂ´t be alarmed if you have an extremely young nurse, mechanic or childcare worker: they have been training for years.

If thereÂ´s one dish the Swiss are most famous for, itÂ´s cheese fondue. They have their own rituals for this rich and indulgent dish that must be observed.

When at a restaurant or visiting Swiss friends, you will be offered the following drinks to accompany fondue: wine, schnapps or tea. Beer is definitely frowned upon. The Swiss arenâ€™t being difficult: they just believe that some drinks help you digest the melted cheese better.

When eating fondue, diners are not supposed to take a dainty little swirl with their fork to avoid germs. Instead, start stirring vigorously as soon as the fondue pot is put on the heater to prevent the cheese from burning.

The Swiss tend to be pretty traditional with their fondue, sticking with domestic favorites like Emmentaler, Gruyere and Vacherin rather than mixing things up with foreign varieties like cheddar. And donÂ´t throw the fondue pot into the sink as soon as all the melted cheese is consumed: the Swiss like to eat the crust that forms at the bottom, which they call the religieuse.

We would like to remind you that we currently have vacant positions for specialist doctors in General Medicine and Internal Medicine in the German speaking Cantons of Switzerland. For more info’s visit our site!